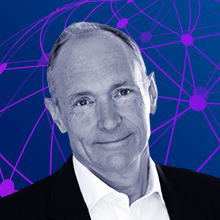 Sir Tim Berners-Lee invented the World Wide Web in 1989. He is a scientist and academic whose visionary and innovative work has transformed almost every aspect of our lives.

Having invented the Web in 1989 while working at CERN and subsequently working to ensure it was made freely available to all, Berners-Lee is now dedicated to enhancing and protecting the web’s future. He is a Founding Director of the World Wide Web Foundation, which seeks to ensure the web serves humanity by establishing it as a global public good and a basic right. He is also Director of the World Wide Web Consortium, a global web standards organisation he founded in 1994 to lead the web to its full potential. In 2012 he co-founded the Open Data Institute (ODI) which advocates for Open Data in the UK and globally. Sir Tim has advised a number of governments and corporations on ongoing digital strategies.

Sir Tim has received multiple accolades in recent years. These include receiving the first Queen’ Elizabeth Prize for Engineering in 2013, election as a Fellow of the American Academy of Arts and Sciences in 2009 and being knighted by H.M. Queen Elizabeth in 2004. He has received over 10 honorary doctorates, is a member of the Internet Hall of Fame, and was awarded the Finland Millennium Prize in 2004, and the A.M. Turing Award — often called ‘computing’s Nobel Prize’ — in 2016. In 2007, Berners-Lee was awarded the UK’s Order of Merit – a personal gift of the monarch limited to just 24 living recipients and was named one of Time Magazine’s ‘100 Most Important People of the 20th Century’. In 2012, he played a starring role in the opening ceremony for the Olympics, where, in front of an audience of some 900 million, he tweeted: “This is for everyone”.