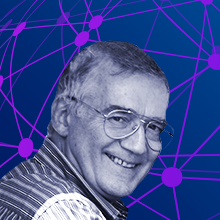 Robert Cailliau is a Belgian informatics engineer who proposed a hypertext system for CERN and collaborated with Tim Berners-Lee on WWW from before it got its name.

Cailliau graduated from Ghent University in 1969 in electrical and mechanical engineering later obtaining an MSc from the University of Michigan in Computer, Information and Control Engineering. In 1974 he joined CERN as a Fellow, working on the control system of the accelerators. In 1987 he became leader of Office Computing Systems, and in 1988 proposed the study of an internal hypertext system for documentation in the LHC era. In 1989, Tim Berners-Lee proposed an internet-based hypertext system, calling it World Wide Web. Cailliau and he co-authored a CERN proposal for funding the development. Cailliau became a key proponent of the project.

In November 1991 he organised the first public WWW demonstration at the Hypertext Conference in San Antonio. In collaboration with the Fraunhofer Gesellschaft he involved the European Commission through the WISE project. Through his work with CERN's Legal Service, CERN released the web technology into the public domain on 30 April 1993.

In December 1993 Cailliau called for the first International WWW Conference, a milestone in the development of the web, held at CERN in 1994. Cailliau played an important role in setting up the WWW Consortium, helping to transfer the web development from CERN to W3C in close collaboration with INRIA. In 1995 Cailliau started the "Web for Schools" project with the European Commission, introducing the web as a resource for education.

He retired from CERN in January 2007. He is a proponent of putting the principles of coding on school curricula and personally prefers LiveCode as a tool.